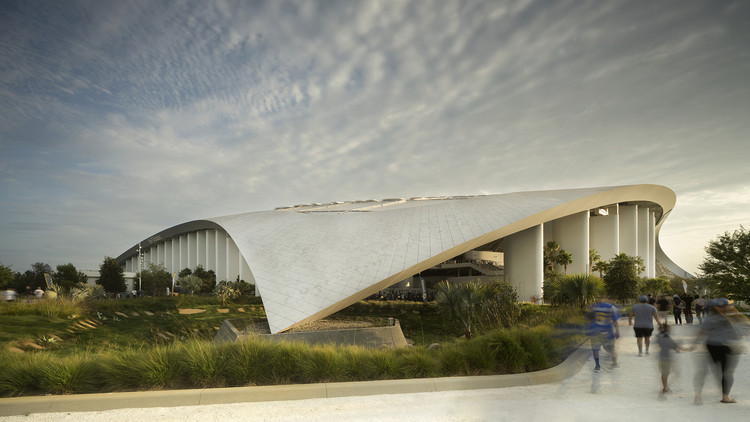 Text description provided by the architects. SoFi Stadium was designed to be unlike any stadium anywhere, a reflection of Southern California’s laid-back lifestyle and an addition to the world-class entertainment venues the region is known for. From open-air concourses to a 360-degree dual-screen video board above the field, the 3.1 million-square-foot stadium (288,000 sq. meters) has quickly taken its place on the global stage with design elements never seen before at a sports venue. The HKS-designed structure is the home to both the Los Angeles Rams and Chargers of the National Football League. In February, the Rams edged out the Cincinnati Bengals to win Super Bowl LVI at SoFi Stadium, becoming the second team in NFL history — the Tampa Bay Buccaneers were the first — to win a Super Bowl title in its own stadium.

Three Venues Under One Roof. Designing SoFi Stadium was far more than a typical stadium project for HKS. It was an opportunity to build on the Los Angeles area’s reputation as one of the world’s best entertainment destinations and to push the envelope in the architecture industry. As part of the new Hollywood Park mixed-use development in Inglewood, three venues — the 70,000-seat SoFi Stadium (expand to accommodate up to 100,000 guests with removable seating), the 6,000-seat YouTube Theater, and the 2.5-acre American Airlines Plaza — were designed to sit under one massive, swooping roof. The interconnected spaces can host simultaneous events that don’t disrupt one another, or work in concert for a major production if necessary, making Hollywood Park an integrated entertainment destination that can adapt to different event types.

The monumental exterior shell and roof structure of the Hollywood Park project has a distinct form reminiscent of Pacific coastal waves that wash ashore just over five miles away. The porous canopy is comprised of more than 35,000 anodized aluminum panels, with each panel conforming to the geometry in a way that no two are the same.HKS’ Laboratory for INtensive Exploration (LINE) developed a custom computational tool that could handle the panels’ complex geometry and generate a massive digital model. The City of Inglewood accepted a stamped and sealed digital Model of Record in lieu of paper drawings, establishing the first instance in the United States of a Model of Record being allowed for permitting an architectural project. This process ensured construction accuracy and helped the project remain on schedule.

Below Ground and Fifth Elevation. The FAA’s height restrictions, one of the project’s initial design challenges, became one of the most prominent features within the overall project: the seating bowl sits 100-feet below the existing grade – about two to three times the depth of other similar multiuse venues. The partially submerged design made the stadium an embedded object, a layout inspired by the unique architecture and geography of Southern California. The roof, bowl, and concourses were sculpted to evoke an outdoor venue while providing the flexibility of a traditional domed stadium. The region’s unique climate also informed the design of the monumental roof. Made of single-layer ethylene tetrafluoroethylene (ETFE), the fritted roof is comprised of more than 300 panels. ETFE reduces solar heat gain and allows natural light to flood into the stadium and American Airlines Plaza, adding to the allure of an indoor/outdoor space.SoFi Stadium’s innovation also helps provide airline passengers with a breathtaking view as they take off and land. An LED system embedded in the stadium’s roof can project images and video to passengers traveling in and out of LAX Airport, making the roof the world’s largest television screen.“The screen has become this great postcard to Los Angeles, where memorable things happen,” Evans said. “It’s become this wonderful message board for the community.”

Climate and Indoor/Outdoor Experience. Inspired by the unique local climate and geography, Hollywood Park features climate-adaptive architecture and landscape architecture, including a lake and a vast network of green spaces. The stadium’s open-air design capitalizes on Southern California’s mild climate, allowing visitors to feel as though they are inside and outside at once. The design encourages wind flow and provides relief from direct sun and protection from rain while maintaining a connection to the sky and surrounding nature. Whether they’re walking through the wide concourses or catching the action from their seats, people who visit SoFi Stadium enjoy cooling ocean winds that make attending events in even the heat feel like a breeze. Architecture and the surrounding landscape architecture were a collaborative effort between HKS and Studio-MLA. The stadium’s passive ventilation and daylighting strategies capitalize on the sun’s position and ocean winds throughout the day, resulting in a series of small microclimates on the site. The carefully planned landscape design spreads out like a pinwheel from the stadium, giving each side a unique personality with one of five different plant communities found in Southern California and considered to be part of the Mediterranean biome. Montane evergreen trees and dark foliage populate the East Canyon while the West Canyon, which is closer to the ocean, emulates Chaparral coastal bluffs. Desert elements can be seen on the stadium’s north side, and the lake park is surrounded by sycamore trees and tall grasses characteristic of Riparian ecosystems. Climate-responsive plants from other Mediterranean biome regions are expected to sustain the site’s local ecosystem in the face of harsh environmental changes predicted for the future.

Seismic Responsive Design. Southern California’s landscape treats residents and visitors to the beach, mountains, and the densest metropolitan area in the United States within just a short drive. But the region is also filled with seismic fault lines and the risk of earthquakes, something the HKS design team needed to account for.SoFi Stadium’s free-standing roof that hovers above, around, and over the massive venue is held up by 37 massive earthquake-resistant columns. The roof is open on three sides, which allows for ocean breezes to flow through the seating bowl. Because the roof is detached from other components like the stadium bowl, YouTube Theater, and American Airlines Plaza, it can independently move in response to shifts in the Inglewood fault line. A giant, “seismic moat” up to 12’ wide and 100’ deep also encircles the stadium to keep guests safe during earthquakes. If there’s a temblor, the roof and stadium move independently from one another, separated by the massive moat.

A New Entertainment Destination. Pushing boundaries in the digital age, SoFi Stadium incorporates cutting-edge technology including the 360-degree, dual-sided Infinity Screen by Samsung, which makes the action on the field larger than life for fans inside the stadium.SoFi Stadium and Hollywood Park have already boosted overall tourism revenue for the City of Inglewood and the surrounding area. The former Hollywood Park Racetrack site is set to bring even more revenue with plans for additional retail, commercial and residential spaces. In addition, several major events are already scheduled for the venue including the College Football National Championship Game in 2023, and the Opening and Closing Ceremonies of the Summer Olympic Games in 2028.