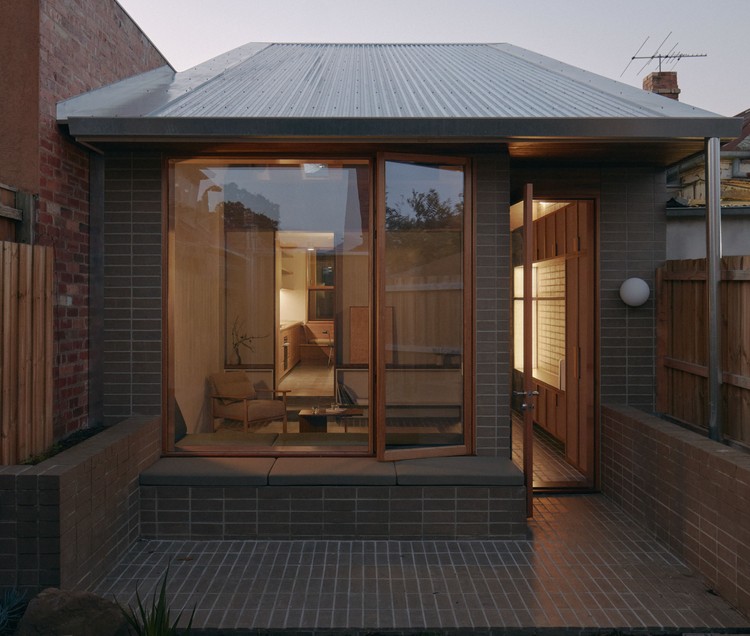 Text description provided by the architects. The client had lived in the existing home for almost a decade and was settled on the general ‘feel’ of the house, as well as the size of the existing garden, which meant minimising how much the extension ate into the backyard. Having lived in the house through his mid-20s to mid-30s, it had slowly become more of an adult home over the years. What our client valued about the home was that it felt homely and was not pretentious – it maintained a sense of warmth, which was something he wanted to preserve in the extension.

With no plans for children in the future, there was no need for an overly large extension to accommodate for multiple new bedrooms, or a large laundry. The brief was to maintain the existing front two rooms of the heritage house as is, update the heavily deteriorating existing building and adapt the rear section to suit a more contemporary layout – to make the space feel open and light filled, which was a challenge considering the extremely narrow, south facing site. The existing rear section isolated the living areas from the outside which made for a claustrophobic feel, reminiscent of many old Victorian homes which had the toilet blocking off access to the rear.

Our clients brief request was for the “design to be quietly clever and robust”. The response was two fold: – create a feeling of openness and light in a south-facing home, while still creating intimate private spaces to retreat to. Material selection was restrained, robust, and dedicated to the feeling of warmth.

Looking at the proposed plan – the extension was all about rectifying a defunct terrace typology common to the era. But in resistance to contemporary open-living, lounge and dining is partitioned by central wet area and mezzanine, funneled between two hallways. This divides the spaces into intimate gestures – creating separation within a seemingly open volume. Additional amenity was configured under a steep skillion roof, with solar array adjacent. This was possible by terracing the site to the rear, and afforded an increase of ceiling height for the mezzanine – seemingly luxurious when juxtaposed by the narrowness of the property, and the roof form appears conservative from the front due to level changes.

The result was a feeling of height and lightness, while still maintaining intimacy and separation. Clerestory windows allow light to penetrate and the play of light and shadow as day plots its course is slowly unfolding as a constant joy and delight for the client. Joinery is used to craft space and paired with robust materials creates a timeless backdrop for his everyday life.